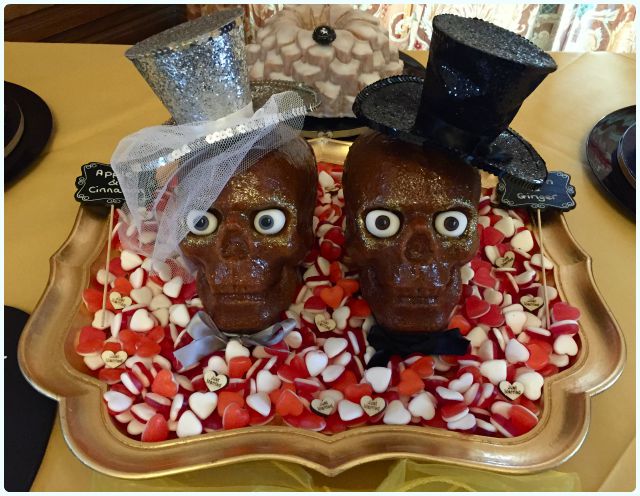 Imagine the scene. My friend Sarah announced on Christmas Day that she was getting hitched. The Bozos (collective term for my homies) sprang into action, and became a mean, lean planning machine. Between us we threw a fantastic hen party (Henfest), and assisted Sarah and Mark in planning their big day (Wedfest, naturally). 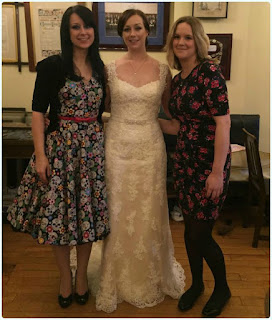 Sarah and Mark met over a mutual love of metal, therefore their big day was never going to be a bog standard white wedding with sugared almonds in net bags, and a tiered cake with lots of piped royal icing. Thank God for that!

That's when the question came. I'd been waiting for it, and was actually quite relieved when it finally occurred. Sarah and Mark asked me to make their wedding cake. They had something small in mind, perhaps one large bundt cake with a small one on top with pretty icing. Not a chance.

After looking through my bundt page, Sarah clapped eyes on the 3D skull I did last Halloween; she was smitten. Initially the two skulls were going to be it, until I decided that this was nowhere near enough cake for our Wedfest knees up! So in the end, we had two skulls (one apple and cinnamon and one lemon and ginger), chocolate covered Snickers, Iron Maiden Trooper beer and raspberry and white chocolate flavoured bundts too.

I'll say one thing, two glittery life-sized skulls wearing top hats definitely caught the guests' attention as they walked into the wedding breakfast. I think the fumes from two kilos of Haribo helped to keep folk alert too... 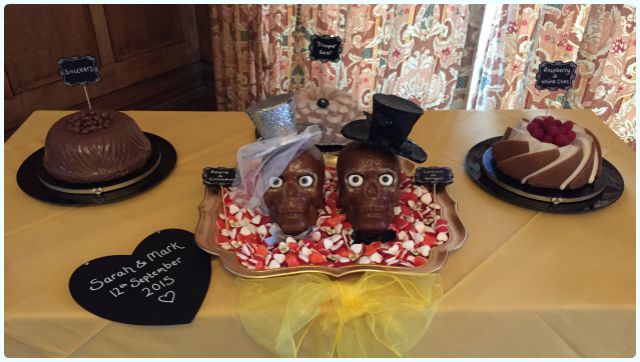 It was an absolute honour to make Sarah and Mark's wedding cakes, and I'm still pretty choked that they trusted me with such an important task. We had the most fantastic day, Sarah looked utterly stunning and everything went just perfectly. I can't see any wedding topping this one any time soon...

Cranks Giveaway: Crank Up Your Lunch!

It's been a while since I've done a giveaway, so I've teamed up with my pals at Cranks to give you a chance of winning a little lunchtime treat for you and your homies. Our team at work recently put their Whole Lotta Loaf through its paces, and saw that it was fully wonderful, so I have every confidence in their new veggie friendly sandwich range. I like their cheeky names too... I've got my eye on Falafelly Good!

Here's what they have to say... 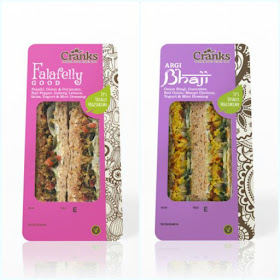 Since their swinging start down Carnaby Street in 1961, Cranks have always been champions of great tasting, wholesome food. From the remaining Cranks Kitchen down in Totnes, Devon to their slow risen wholemeal loaf and vibrant range of delicious handmade sandwiches available on store shelves, Cranks’ philosophy has always been that nature knows best. Proper food indeed!

Cranks Food to Go
If their range of tasty vegetarian sandwiches hadn’t already shaken up the food to go fridge – the onion bhaji and mango chutney stuffed Argi Bhaji is worth a bite – then wait until you see their new colour in packs. Not only are Cranks making veggie lunches delicious and easy to come by, but they’re taking the stress out of lunch too with fun patterns and shapes to spend your lunch hour colouring in beautifully. Bliss.

Eyes on the Prize

'So what can I win?!' I hear you cry! Cranks have put together a beautiful lunch hamper containing:


They'll even keep it all nice and chilly for you! 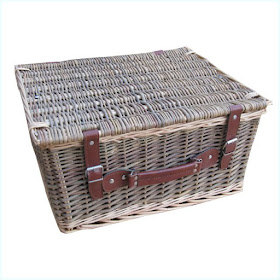